Doing it in Excel

Working out the surfaces for the distribution of the average and spread in response to new data requires simple arithmetic, but to simplify things further I have provided new Excel functions to do those calculations. If you want to produce graphs or answer questions about the surfaces and other curves then you need to use further Excel functions.

To process a sample of data (which could have one or more data points in it) you first need to calculate three numbers about the sample using the appropriate Excel functions, as follows:

sample variance - use VARP() because its denominator is sample size, not sample size - 1

An alternative to entering these as formulae is to define new functions for Excel by pasting this code into an appropriate module:

With this code in place the functions will work like any other function in your spreadsheet (except that you will find them under 'User defined' in the function wizard). You can then update your parameter values like this:

(Obviously the input values need to be replaced by appropriate values or cell references.)

Another approach is to update your functions after each new measurement. This involves a sample size of 1 and the variance is always zero. The update reduces to just this:

The very first values you use for mu, kappa, alpha, and beta can be 0, 0, -0.5, and 0 respectively. These are relatively uncontroversial, open-minded parameter values. The relevant Excel functions can't handle these values but don't worry. As soon as you have two or more data things will start working as you expect.

Watching the normal-gamma surface as it changes shape in response to new results is interesting and reassures you that you are doing the right thing.

Excel does not provide the normal-gamma distribution so you need to define it by pasting in this code:

where the inputs to the function need to be replaced with the obvious numbers or references to them, as usual.

To show the surfaces in a graph you need to make a table where the column headings are evenly spaced values for the mean and the row headings are evenly spaced values for the standard deviation. In both cases the values need to cover the likely ranges to show the most interesting part of the surface. Enter formulae to give the probability density for each cell in the table then insert a chart, choose a 3D surface, and you're done.

The surfaces produced by Excel 2003 (the old one I still use) are not very nice looking and are hard to view. So, for many practical purposes it is easier to just use conditional formatting on the table itself to show the distribution. It might look something like this:

See how much easier it is to read the axis values than using Excel's 3D surface chart.

If you want to graph the normal distribution for a particular mean and standard deviation then use Excel's built in NORMDIST() function like this:

Focusing on the mean

However, this is often just too much information! Usually it is the mean that we care about most. To understand how our beliefs about the true mean should be shaped we need to somehow sum all the possibilities over all the potential standard deviations. Fortunately, there is a well known distribution that does just that. It's called Student's T.

Student's T distribution has three parameters, called df (degrees of freedom), mu, and sigma. These can be calculated from the parameters of the normal-gamma using these simple formulae:

Alternatively, copy and paste this code into the right module:

You can then use these new functions like this:

Looking at results for the mean only

To view the evolving T distribution as more data are considered you need a suitable function to calculate points on it. Sadly, Excel's built in T distribution does not give probability densities and can't handle all three parameters. It only deals with the 'standard' T distribution. As always the solution is to paste in this code:

With this in place you can make simple charts like this: 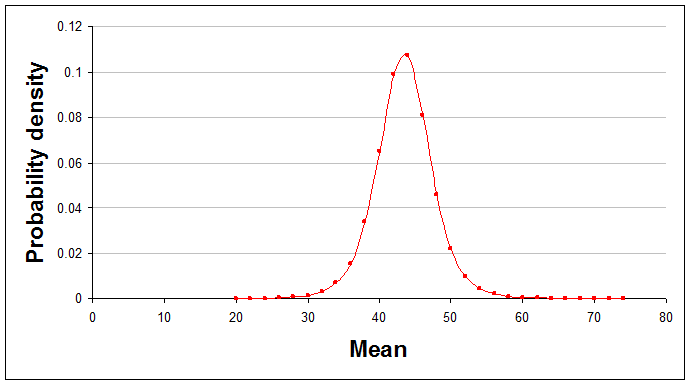 As before, this shows the situation with all seven data points used.

Summarising results so far for the mean only

All these graphs are comforting and give you a sense of how things are developing, but to summarise the situation precisely with numbers you need Excel to do some simple calculations. Here's how to do some different types of summary number, focusing only on the mean.

Comparison with a threshold

To calculate numbers like this you need a function that Excel does not provide, so paste this into the appropriate module:

In the following formulae df, mu, and sigma are the parameters of the T distribution you have calculated and threshold is the threshold. Obviously you need to replace these with numbers or references in your spreadsheet.

To find the probability of the mean of the true normal distribution being below the threshold use:

To find the probability of the mean of the true normal distribution being above the threshold use:

The probability of the true mean being exactly equal to the threshold, when using the T distribution, is always zero.

For most values of df, mu, and sigma that you will encounter the T distribution looks like a hill with just one peak. When it has this shape it makes sense to summarise the curve by stating a range of means that captures most of the area under the curve. This is the fat middle of the curve, rather than the thinner tails.

To find the probability that the truth lies between a lower and an upper threshold you have chosen use:

To find the range that lies between the 10th and 90th percentile of the curve (i.e. an area that contains 80% of the probability) you need an inverse probability distribution so define your own function like this:

You can then calculate the percentiles with these formulae:

You could say, for example, something like "I am 80% confident that the true mean lies between 12 and 55."

Since the T distribution is symmetrical, the range between the 10th and 90th percentiles is also the narrowest range that contains 80% of the probability.

Numbers to bet with

Having a distribution over all possible averages, or all possible combinations of average and standard deviation, is informative and helpful, especially for long term decision making and forecasting. It's much better than just having a best estimate of the true average. However, what do you do if you have to make a decision, or perhaps place a bet, on just the next period of time? For decision-making purposes it is generally better to hold on to the full distribution and use it in your decision model than to summarise into one number.

mu = mu       (yes that's right, it's still the same number for both distributions

If you want to know the probability of the next measurement being less than x then use:

If you want to know the probability of the next measurement being more than x then use:

If you want to know the probability of the next measurement being between low and high then use:

Another common requirement is to compare two or more distributions of measurements. There is a widely used statistical significance test for this, Student's t-test, so the technique below is a replacement for it.

This would be appropriate if you were studying two independent processes that each produced measurements that were normally distributed. You just apply the usual normal-gamma distribution technique described above to each of the processes to get df, mu, and sigma values for each. The resulting T distribution curves might look something like this:

Here are examples of useful summary statements about the difference between these two curves that you might make:

Sadly, Excel doesn't come even close to providing a function to do the comparison, but if you paste this code in as usual you can use this new function:

In this formula diff is the difference between the two means and runs is the number of iterations used to arrive at an answer. If you just want to know how likely it is that the true mean of one is bigger than the true mean of the other then use a diff of zero. The more iterations you use the more accurate the results, but the longer it takes. I suggest using 1,000 runs first to see what happens.

If you have more than two T distributions to compare then you can compare them in pairs and report your findings.

Where the normal-gamma distribution is what you want then you need to generate pairs of numbers each time, one for the mean and the other for the standard deviation. Generate the standard distribution number first, using the inverse gamma function:

The alpha and beta in this formula are the same as from the normal-gamma distribution you are using. Next, generate a number for the mean like this:

where stdev is the standard deviation generated in the first step.

With this approach to statistics there is no need to decide on your sample size in advance. You can just record each measurement or set of measurements, process the new data, and stop the moment your results are clear enough for your purposes.

Of course it can be helpful to have some idea in advance of how many measurements you might need to examine. To explore this just try possible sample sizes, sample averages, and sample variances and see what the normal-gamma or T distributions would look like.

As always, the examples of summary statements given above should really have been prefaced with the words "given the data used and the assumptions made," because we sometimes have a choice about which data to use, and because different results will arise if different assumptions are made.

This is about as tricky as these recipes will get. That's because of there being two parameters for the underlying frequency distribution instead of just one.


Hundreds of people receive notification of new publications every month. They include company directors, heads of finance, of internal audit, of risk management, and of internal control, professors, and other influential authors and researchers.